Thank you for your patience while we retrieve your images.

From as early as 1905 through the 20’s 30’s and 1940’s car and motorcycle racing has occurred along the beach in Pismo California. Many of these races were time trials to see who could go the fastest on any given day and others were side by side race competitions

Bobby Green of the 1933 Group who has restored many Los Angeles historic landmarks decided to re-create this type of racing from a bygone era. In the Fall of 2016 in conjunction with the Oilers Car & Motorcycle Club the dates of October 15-16 was secured with the state and local governing bodies and the word was put out that all Pre-War cars and motorcycles would have the chance to enter this unique event and race just like it was done many years prior.
Like a clarion call to those that have the need for speed and a love for vintage cars and motorcycles racers and enthusiasts from all over America and the World showed up for this amazing chance to race on this historic California beach

Vintage pre-war race cars, hot rods and motorcycles of all kinds were entered to race including, Bellytank race cars, Roadsters, single seat speedsters, vintage Harley Davidson & Indian motorcycles and original race cars from the eras that they competed and raced in.
Everything was set in place and as many as 20,000 race fans were expected to show up when Mother Nature threw a curveball as the remnants of Typhoon Songda was due to hit Pismo Beach the very weekend of the race – and that’s exactly what happened.

As the storm surge of high tide arrived first on the 14th much of the original racing surface and cordoned off fencing was inundated by the encroaching ocean, Bobby and his team decided to move what they could a bit more inland and pray it didn’t get any worse but you can’t fight an immovable force like a high tide so the race organizers decided to play the hand they were dealt and despite the encroaching ocean water and rain they decided to race for a few memorable hours on October 15th 2016, it was only a small window in time but for all those racers who entered they were able to make several passes and race on the beach before the weather made it impossible and the race was red flagged because of the deteriorated racing conditions.

Race organizers were hoping maybe one more day of racing could be held the following Sunday morning after the storm blew through but adding insult to injury Oct. 15th was a full harvest moon that greatly increased the already high tide and there simply was nowhere to race as most of the flat area of Pismo Beach was under water.

The photographs at this exhibition were taken during the few hours that racing was held as the remnants of the typhoon hit the coastline while racing was in progress.
ll in all despite daunting circumstances for the race organizers they pulled off an amazing and truly historic
A event that was enjoyed by all participants and the thousands of racing fans that attended as this race will be remembered in the years ahead as one of the more unique events held in the last seventy years at Pismo Beach, Pismo California. 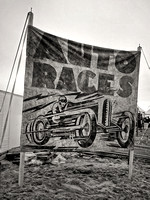